In the morning article, I highlighted the level of 1.0205 and recommended making decisions with this level in focus. Now, let's look at the 5-minute chart and try to figure out what actually happened. A decline in the euro/dollar pair to 1.0205 in the first half of the day and a false breakout of this level gave an excellent buy signal. I paid attention to this level in the morning article. As a result, the pair rose by 35 pips. Shortly after, the pair faced the nearest resistance level of 1.0240. For the second half of the day, the technical outlook has changed considerably as crucial economic data will soon be unveiled. 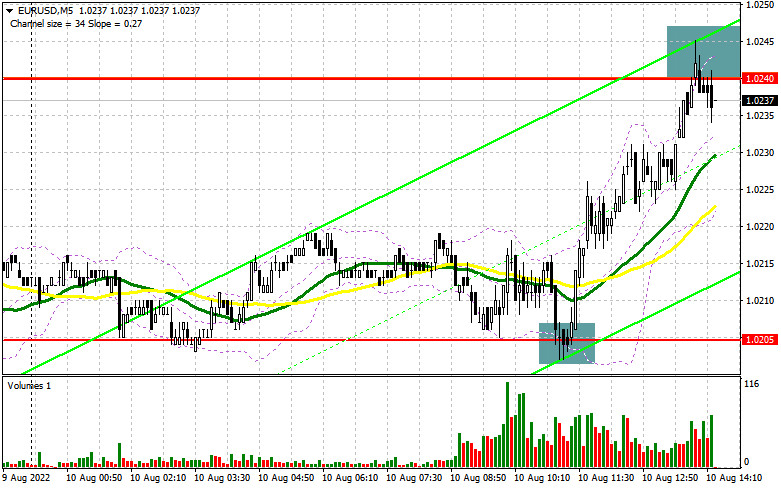 What is needed to open long positions on EUR/USD

Apparently, if US inflation shows signs of a slowdown, demand for risky assets will increase significantly. If so, the pair will be able to break above the sideways channel, aiming at the nearest resistance level of 1.0266. If inflation accelerates once again, the bulls are likely to lose the upper hand. The pressure on the pair will escalate. Besides, the Fed is sure to stick to a hawkish stance, further slowing down economic growth. Given that the technical outlook has been revised, if the pair drops in the afternoon, only a false breakout of the support level of 1.0225 will give another buy signal. If so, we can count on a jump to the resistance level of 1.0266. A breakout and a downward test of this level will force the bears to close their Stop-Loss orders, providing an additional signal to open long positions. The pair may try to reach a monthly high of 1.0292. A more distant target will be last month's high of 1.0323 where I recommend locking in profits. If EUR/USD tumbles and buyers show no activity at 1.0225, the pair is likely to lose momentum. It will open the way to 1.0197. The best option for opening long positions from this level will also be a false breakout. You can buy EUR/USD after a bounce from 1.0172 or a low of 1.0144, keeping in mind an upward intraday correction of 30-35 pips.

What is needed to open short positions on EUR/USD

The bearish sentiment depends on the market reaction to inflation data. Inflation figures will shed light on the Fed's plans for monetary policy. Even if inflation climbs, the reading should not exceed the June figures. Although now, I prefer long positions, I believe short positions after a false breakout of 1.0266 may bring profit. If so, the euro could decline to 1.0225. A breakout of this level and an upward test will generate an additional sell signal. Buyers will have to close their Stop-Loss orders, pushing the price to 1.0197. If it slides below this level, the bulls will be unable to start an uptrend. Thus, the pair could sink to 1.0172 where I recommend closing all short positions. A more distant target will be the 1.0144 level. However, this scenario may unfold only if US inflation remains quite high in July. If EUR/USD tumbles during the American session and the bears show no energy at 1.0266, they will hardly take the upper hand. If so, it is better to postpone short positions to 1.0292 but only if a false breakout occurs at this level. You can sell EUR/USD immediately at a bounce from a high of 1.0323 or even a high of 1.0374, keeping in mind a downward correction of 30-35 pips. 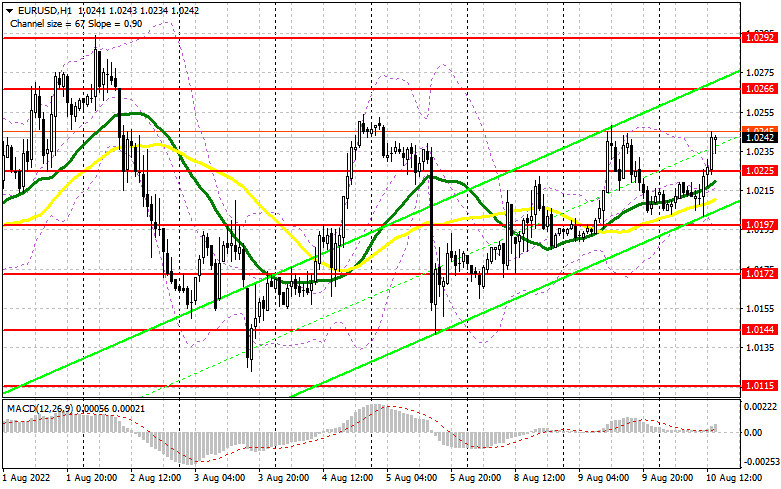 The COT report (Commitment of Traders) for August 2 logged a sharp drop in both short and long positions. However, there was a bigger decline in the number of short positions. It signals the gradual end of the bear market and an attempt to find the bottom after reaching the parity level. Last week, the economic calendar for the eurozone was uneventful. The US, on the contrary, unveiled many economic reports. The Nonfarm Payrolls report was quite positive. The strong labor market has once again shown the resilience of the US economy despite high inflation, recession risks, and aggressive rate hikes. A drop in long and short positions may be associated with a seasonal factor. In August, the market activity could become even lower. It is hardly surprising. The US will soon publish its inflation report. Traders will find out whether aggressive monetary tightening has helped the economy or not. If inflation starts to decline, it will be appropriate to open long positions on risky assets. The COT report revealed that the number of long non-commercial positions decreased by 6,349 to 191,692, while the number of short non-commercial positions contracted by 9,122 to 230,503. At the end of the week, the total non-commercial net position, although it remained negative, rose slightly to -39,811 from -41,584, which indicates the continuation of the bull market. The weekly closing price grew to 1.0206 against 1.0161.

*The market analysis posted here is meant to increase your awareness, but not to give instructions to make a trade.

InstaForex analytical reviews will make you fully aware of market trends! Being an InstaForex client, you are provided with a large number of free services for efficient trading.